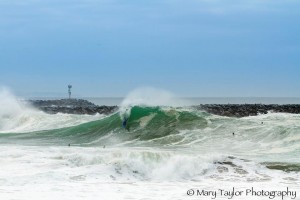 Before reaching the state, the storm churned up powerful swells and potent riptides since Thursday, pulling swimmers into — and under — the water from Chile to Mexico.

“Once those waves are created, they keep traveling until they reach land,” said David Sweet, a weather service meteorologist. “So we can thank our friends Down Under.”

The biggest surf was expected Monday and Tuesday, with waves as high as 15 feet at the Wedge in Newport Beach and sets as high as 6 feet at Zuma Beach.

The sight of large waves — which can sweep spectators off jetties — probably kept the number of rescues down, with crashing breakers making the risks of swimming very apparent, officials said.

“There were not too many takers to the water,” Thomas said. “That was our best lifeguard: just the pure size and force of the surf.”

Farther south in Newport Beach, the Wedge traditionally generates some of the biggest surf in the region because of its south-facing beach, underwater topography and the nearby jetty that bounces waves back onto themselves.

The waves there grow rapidly and crash close to shore, and they have been known to injure surfers, sometimes fatally.

The powerful swells are expected to subside by sundown Tuesday, ahead of a small storm that is forecast to bring light rain later this week in Orange, Los Angeles and Ventura counties.

Sweet, the meteorologist, advised beachgoers to remain cautious. “Never turn your back to the ocean,” he said.

“You don’t want any waves sneaking up on you.”

WE ARE COACHES, INC. DOES NOT OWN THIS TEXT. Link for original content is above.

We cannot guarantee space availability within 24 hours of start time.